I’ve been to the Outer Banks of North Carolina many times. My first time was with my mother and brother when my brother and I were both teenagers. Since then I’ve been all up and down the Outer Banks, which stretches from Corolla in the northern tip, down to Kill Devil Hills/Kitty Hawk/Nags Head in the middle, and Hatteras and Ocracoke in the southern portion. At one point or another in my life, I’ve been to every portion of this series of barrier islands.

This summer I had a trip planned to Kitty Hawk after winning a story contest with the prize being two free nights at a hotel on the beach in Kitty Hawk. Even with the pandemic in full force in North Carolina, we were able to have a great time and relax a bit. Everyone we saw in public was wearing a mask, there was hand sanitizer everywhere we went such as at our hotel, shops, and restaurants, and the beaches are wide and long enough it was easy to socially distance from other people.

Like I said, this wasn’t my first time to the area but it was my daughter’s first time to this particular part of the Outer Banks. I wanted her to see the Wright Brothers Memorial and Jockey’s Ridge State Park in particular. I also wanted to take her to some of the locally owned restaurants and little beach shops. Most of all, I wanted to allow her to have a nice, quiet, relaxing weekend and have some fun before all of the stress of high school started.

Jockey’s Ridge State Park is a fun place to spend an hour or two, more if you want to try hang gliding. It’s the tallest living sand dune on the Atlantic Coast and covers 426 acres. You can go sand boarding, fly a kite, watch the sunset, go hang gliding, or just walk along the dunes. There are three very short trails, one of which has brochures at the trailhead. Most people just wander around and end up watching the people trying their hand at hang gliding with Kitty Hawk Kites, the only company that offers hang gliding lessons on the dunes.

Every time when I’ve been to Jockey’s Ridge State Park, I’ve just walked around taking in the views. It’s always been quiet and serene and the dunes are large enough that even if there are several other people there, it can feel like there’s hardly anyone else but you. The dunes seem like they go on forever but it is fairly easy to reach the point where you see the end where they meet the ocean. You can get great views of the surrounding area from this vantage.

The Wright Brothers National Memorial is impressive whether it’s your first or fifth visit. If you’re not familiar with the history behind the memorial, Wilbur and Orville Wright forever changed the world with the first successful powered airplane flight at Kitty Hawk, North Carolina in 1903. The two brothers lived in Ohio but chose this area of North Carolina to test out some theories about flight they had beginning in 1900.

This is another place in the Outer Banks where you can spend an hour or two just walking around. For some reason, the memorial seemed even bigger to me this visit. There is a great visitor center that serves as a museum that’s full of historical information and photos but it was closed due to the pandemic. You can check out the First Flight Boulder and the Flight Line with boulders that mark the first flights on December 17, 1903. It’s funny to see the first three boulders clustered together and then the fourth boulder noticeably further from the previous boulders. I can imagine the Wright brothers’ excitement when they were able to fly to that fourth boulder.

There is also an area with reconstructed 1903 Camp Buildings where the Wright brothers lived and worked during the summers of the three years they spent there. After their successful flights in 1903, they returned in subsequent years but abandoned the camp site in 1911. Now you can see a reconstructed hangar and living quarters of the brothers. While I was checking it out, a park ranger pointed to the bunks at the top part of the living quarter and said the brothers were so excited when they figured out how much more comfortable it was to sleep in the top part of the wood cabin than on the ground. I didn’t think to ask why until later so I’m not sure if it was simply a softer place to sleep or an escape from the inevitable ants and other bugs on the ground.

As always, the National Park Services website for the Wright Brothers National Memorial is full of information for planning a visit or if you’re just interested in the history, which you can find the link for here. 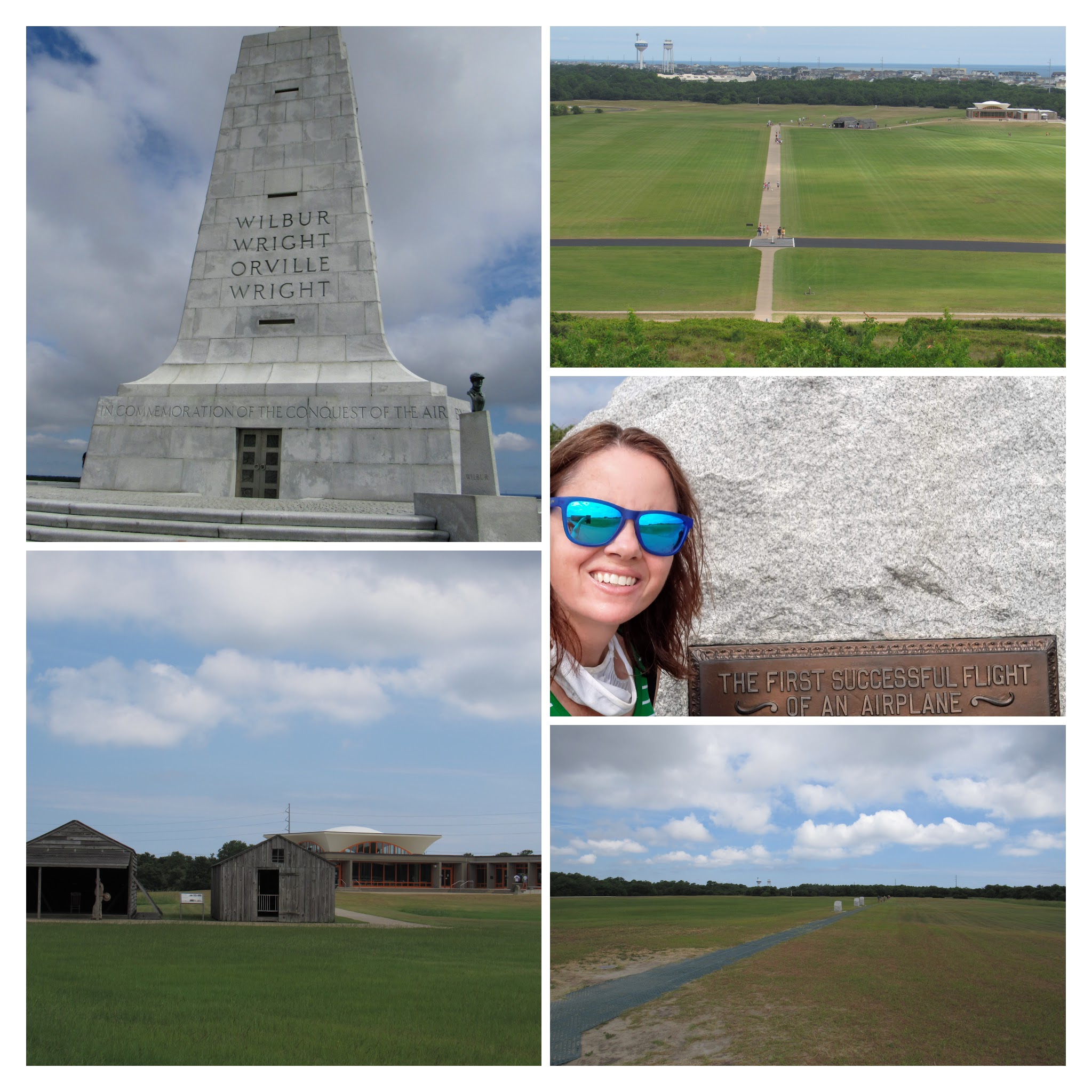 What about the beaches?

If you do a  Google search to ask what are the best beaches in the Outer Banks, it’s likely Kitty Hawk will come up as one of the best. Honestly, I don’t see much of a difference in the beaches whether you’re in Kitty Hawk, Kill Devil Hills, or Nags Head. The sand is consistently the same golden color and the beaches are wide and long in all three areas. There are some pretty decent waves, though nothing like you see in the Pacific Ocean. Nags Head does have Jennette’s Pier, the longest public pier in North Carolina, which sets it apart from the other nearby beaches.

Since the Outer Banks consists of more than just Kitty Hawk, Kill Devil Hills, and Nags Head, I should also mention a few of the other beaches in the Outer Banks. From Rodanthe southward including Avon, Hatteras, and Ocracoke there are unincorporated communities and villages most with only a few hundred residents. This area is quiet and not full of chain restaurants or hotels so if you like to really get away from it all, this is a great area for that. Just north of Kitty Hawk, you’ll come to Southern Shores, Duck, and much further north is Corolla, where the wild horses are.

My daughter’s first trip to the beach was to Duck, North Carolina, as shown in the first photo above. Duck is known to be one of the most dog-friendly beaches in the Outer Banks, but that wasn’t why we chose that area. Honestly, a co-worker of mine had a condo there and was renting it out at a good price so we decided to check out that area since we hadn’t been that far north. It seems to be a bit more expensive than Nags Head and the surrounding cities and caters more to the upper middle-class and upper class. However, the beaches are pretty much like what you see as you go south along the Outer Banks, just quieter.

A word about the food

The Outer Banks is full of seafood restaurants, as you can imagine, some are over-the-top cheesy and touristy, like Dirty Dick’s Crab House (a chain restaurant), plus plenty of chain restaurants specializing in fried seafood, but there are also plenty of locally-owned BBQ restaurants like High Cotton and Pigman’s. We stumbled upon a wonderful small Italian restaurant, Josephine’s Sicilian Kitchen after an Asian fusion restaurant we had plans to eat at turned out to be closed, even though their website said they were open (no doubt COVID-related). So you see you can find much more than just seafood restaurants if you do just a little looking around (not that I don’t enjoy seafood, it’s just good to have options).

We also discovered the closest thing we’ve been able to find to true Hawaiian shave ice at Booty Treats Ice Cream and Shave Ice. I had a coconut shave ice with cookie dough melt-in ice cream sprinkled on top and my daughter had banana shave ice with chocolate melt-ins and we both loved our choices. Another of our favorite ice cream shops is Kill Devil’s Frozen Custard and Beach Fries. I had been here before a long time ago and it was still as good as I remembered. They have a huge selection of sundaes, malts, floats, milkshakes, hurricanes, but also have some pretty good sandwiches and are well-known for their fries so come with a big appetite!

There are plenty of options of where to stay, depending on if you’re coming by yourself, with a friend, family, or group of friends or family. You can find by far the biggest selection of places to stay in the middle part of the Outer Banks- Nags Head, Kill Devil Hills, and Kitty Hawk. This goes for hotels, Airbnb properties, and house rentals. Likewise, you can find the biggest range in prices of accommodations in the middle part. Because there are fewer options in the northern and southern sections, the prices tend to be higher in general.

There’s not much reason to get too hung-up on where you choose to stay because you can also easily drive from the southern portion of the Outer Banks to the northern portion in a day. Say you decided to drive from the Hatteras Lighthouse to Corolla to check out the wild ponies. It would take about 2 hours each way, notwithstanding traffic along the way. Still, that would be a pretty fun way to spend a day. Another option is to drive to Roanoke Island, which has historical sites and the North Carolina Aquarium. Say you were staying in Duck and drove to Roanoke Island for the day, that’s only a 45 minute drive each way. The point is, if you’re going to be in the Outer Banks for at least a few days, it’s easy to check out more than just the city you’re staying in, and there’s so much to see in this area, I encourage you to do so.

Have you been to the Outer Banks? If so, where did you go and what did you do? Is this a place you’ve wanted to visit but haven’t made it there yet?

14 thoughts on “Fun in the Sun in the Outer Banks, North Carolina”