Even though I’m sure I visited Great Smoky Mountains National Park at least once if not twice before my recent trip, I honestly didn’t remember any part of it. Nothing looked familiar, none of the trail names sounded familiar, and no parts of it seemed vaguely familiar to me. Granted, my first visit would have been roughly 22 years ago and the other visit around 19 years ago, but still, I would have thought I would have remembered at least some of it. Then again, the first time I was with a friend of mine in high school and her family so I would have just been driven around by her parents, totally clueless about my whereabouts. The second time would have been a quick trip so I’m sure I didn’t spend much time in the area and certainly wouldn’t have had time to do as much hiking as I did this time.

I feel like I really didn’t give the park enough justice before when I was there but this time, I thoroughly got some hiking miles in and saw at least a big chunk of the park. That being said, Great Smoky Mountains National Park covers over 500,000 acres divided between Tennessee and North Carolina (so maybe just a little chunk of it). It is the most visited national park by far, with more than double the number of visitors at the second most visited park, the Grand Canyon. The elevation ranges from 875 feet at the mouth of Abrams Creek to 6,643 feet at Clingmans Dome; sixteen mountain peaks exceed 6,000 feet in elevation. 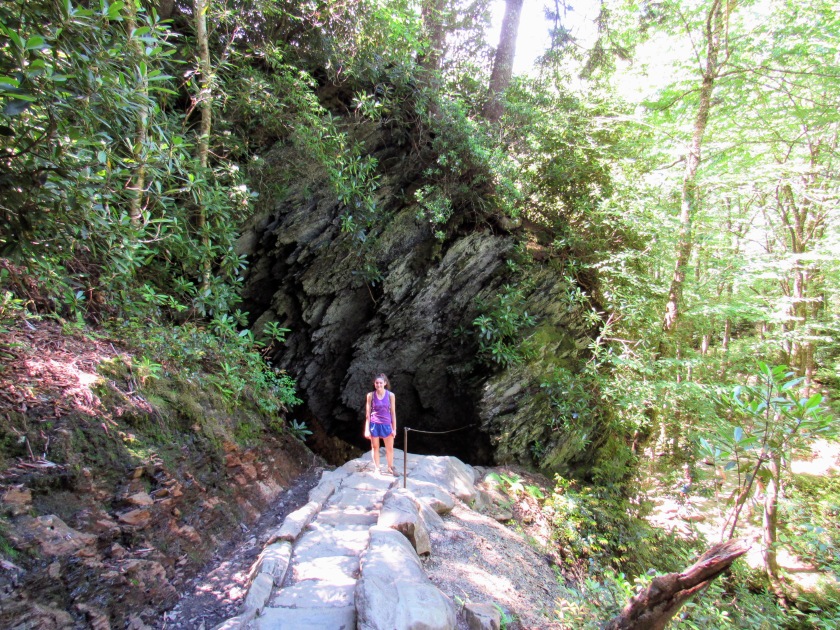 I’m primarily going to go over the trails we hiked since that’s the vast majority of how we spent our time at the park. We spent five full days plus a partial day hiking in Great Smoky Mountains National Park and went to the Oconaluftee Visitor Center on our first day. This was a good place to start because you can get a feel for the history in the park. Many years ago, log buildings were gathered from various places in the Smoky Mountains and preserved at places like this visitor center. We saw a historical house, barn, applehouse, springhouse, smokehouse, and blacksmith shop. The Oconaluftee River Trail is easy and short at 1.5 miles from the museum entrance. We were also excited to see an elk by the visitor center as we were leaving.

We also visited the Sugarlands Visitor Center, on our second day. There’s a short and easy trail to Cataract Falls, but I felt like the waterfall was pretty small and disappointing (good thing it wasn’t a long, strenuous hike). One of the more popular trails we hiked is the Alum Cave Trail, a moderate hike of 4.5 miles. On this trail we saw Arch Rock and Alum Cave. After a quick lunch of sandwiches we had previously bought that morning, we hiked Chimney Tops Trail. This was listed as moderate and is only 3 miles, but it’s extremely steep with only a few switchbacks so it felt like we were climbing straight up the mountain. We saw plenty of rhododendron and wildflowers but not a whole lot else.

On our third day, we did the Roaring Fork Auto Tour. For this, you turn onto Historic Nature Trail, which merges with Cherokee Orchard Road. Our first stop was the Noah “Bud” Ogle Place, a historic house. There was a short nature trail behind the house that we took but somehow we ended up on a much longer trail, the Gatlinburg Trail, which we hadn’t planned on hiking and we ended up having to get back to the main road and walk back that way rather than backtracking, which would have taken much longer.

Next stop on the Roaring Fork Auto Tour was Rainbow Falls Trail. This trail is 2.8 miles each way, if you can actually find parking close to the trailhead, which we couldn’t, so we ended up hiking more like 6.5 miles total. There is a much smaller falls area just before (maybe 0.5 miles) you get to the actual Rainbow Falls. Don’t make the mistake of stopping at the first waterfall, as we almost did, but keep going until you see a massive waterfall.

After another quick lunch of previously purchased sandwiches, our next stop was the Trillium Gap Trail, also known as Grotto Falls Trail. This hike was pretty easy compared to the others in the area and is 1.3 miles each way. The waterfall was one of the best we had seen so far and absolutely worth the hike. We also saw a bear! It was slowly lumbering around the long line of cars, not paying any attention to any of the people. We were walking to our car when we saw it and it was far enough away from us that I wasn’t scared. That would come later during our second bear encounter.

The final stop on the drive is at Place of a Thousand Drips. This is a unique waterfall, as the flow of water splits into numerous channels, cascading around rocks and “creating a thousand drips.” There were several people climbing around the waterfall and of course my teenage daughter wanted to climb up. I chose to watch from the bottom and was glad for my decision when I saw so many people slipping and/or falling (my daughter was fine and never fell but said it was extremely slippery coming back down).

On our fourth day, we hiked Laurel Falls Trail, the most popular hike in GSMNP. It’s one of the few longish paved trails in the park, at 2.6 miles roundtrip. It’s an easy hike and the payoff is big, with a 25-foot waterfall that seems even bigger than that, after just 1.3 miles of easy walking. After lunch (yes, you guessed it, sandwiches we had previously purchased) we drove to Jakes Creek Trail, near the village of Elkmont in a historic district referred to as “Daisy Town.” The Little River Lumber Company logged the area into the mid-1920’s. Adjacent Daisy Town was an escape for the elite people of Knoxville. Currently, the park is restoring 19 of the former 74 homes. You can walk through some of the former homes, which we did before starting out on the trail. Jakes Creek Trail is 3.7 miles each way and runs along Jake’s Creek for a huge portion of the trail, giving plenty of water views and the sound of water flowing all around you as you hike. There was hardly anyone else on the trail, so it was quiet and peaceful.

Our last full day in the park was the most exciting, as you will see. The longest single hike for us was Ramsey Cascades Trail, at 8 miles long. We expected to have bathrooms at the trailhead, as was common at many other trailheads in the park, but alas there were none, and the tea we had at breakfast was running right through us. Maybe a mile into our hike, I found a huge boulder not far off the trail and told my daughter to go first while I waited for her, then I went to use the bathroom. As I was walking back around the boulder, my daughter said in an extremely calm voice, “Momma, there’s a bear.” Sure enough, there was a bear standing right in front of me maybe 4 feet away. My daughter started slowly walking away from the bear, going further up the trail. The bear looked at me, made a grunting sound, clawed at the tree in front of it, then slowly started walking away in the opposite direction from us. I slowly backed away and we continued on our way up the trail.

I kept checking to make sure the bear wasn’t following us, but it didn’t appear to be. When we passed people going the opposite direction from us, we were told a couple of times that they had seen a bear, but we never saw another bear on that trail. Finally after 4 miles, we reached the waterfall, which was an impressive one, at 100 feet tall. The trail was pretty intense towards the falls, with slippery rocks that we had to scramble over, but most of the trail was fairly easy, with gradual climbs. When we reached our car, we decided to dip our feet in the ice-cold water and it was so refreshing!

There are of course many more trails in Great Smoky Mountains National Park, but those are the ones we chose to do. Some came recommended by the hotel staff where we stayed and others were ones I had researched on my own that sounded interesting. You can also easily just drive around the park, park at overlooks, and take in the views that way if you’re not really into hiking. I believe that’s what we must have done the first time I went with my friend and her family, as best as I can remember, but you obviously don’t get as much of a real feel for a place when you see it that way.

For information on camping, pets, history, wildlife, and all the information you could possibly want or need to plan a trip there, check out the Great Smoky Mountains National Park website by the National Parks Service.

Have you been to Great Smoky Mountains National Park? If so, did you hike when you were there? Any amazing trails I missed that you recommend? Did you see one (or two) of the estimated 1600 bears in the area?