I feel like I’ve seen an awful lot of the state of Florida, from Pensacola in the far western edge to Tallahassee then over to Daytona Beach on the eastern part, down to Orlando, then south to West Palm Beach and further south to Ft. Lauderdale, Miami, the Everglades, and the keys all the way to Key West. I’ve also been to Naples and Ft. Meyers and those surrounding areas. Somehow I had never been to St. Petersburg before, though. I was truly missing a gem of the state!

Recently I went to St. Petersburg and also checked out areas around it including Anna Maria Island, Bradenton, and Gulfport. I absolutely loved the area and wondered how this had slipped under my radar before. While we were there we met with one of my husband’s friends he’s known since they were children who lives in Bradenton, so I also was able to get some input and the “insider’s scoop” from him.

There are soft powder-like white sandy beaches all along that area, some with sand dunes (which I find especially beautiful), great restaurants, friendly people, and tons of things to do ranging from water sports and botanical gardens to top-notch museums. Winter reigns supreme here. During the winter months you can expect highs usually in the mid- to upper-70’s and lows in the mid-50’s to mid-60’s. Best of all, it’s sunny most days with little rainfall. What’s not to like about that?

So what’s there to do in St. Petersburg? Well, if you like beaches, there are plenty of them. We visited several different beaches in the area and most of them were pretty wide to accommodate plenty of people. Some were more crowded than others, but they all had the same white, soft sand. Some of my favorite beaches were Pass-a-Grille Beach and Manatee Public Beach but St. Pete’s Beach and Treasure Island Beach are also nice, just a bit more crowded. Bean Point Beach on the tip of Anna Maria Island is beautiful as well, but smaller than some other beaches in the area.

There are also some fun, unique shops on Anna Maria Island, like Pineapple Junktion, Island Charms, the Island Cabana, plus more locally owned gift and clothing shops. Although it was closed when we were there, the Anna Maria Island Historical Society (a museum) looked really cool. You can see the remnants of the original Anna Maria City Jail, which had no windows, no doors, no bars, and no roof, meaning the people who stayed there were eaten alive by mosquitoes and suffered in the heat. According to the posted sign, no one “misbehaved” after spending one night in the jail. There’s also a historical home and some signs with interesting historical information. Just be aware that traffic can get pretty bad during the winter months if you’re going to Anna Maria Island during peak times.

There’s certainly no shortage of places to stay in all price ranges in the St. Petersburg area. Of course there’s Airbnb with hundreds of homes, apartments, and sometimes quirky places to stay like an Airstream travel trailer. There are also hotel chains, local hotels, plus bed & breakfasts in all price ranges. If you really want to splurge, you can stay at the TradeWinds Island Grand Resort. If you’re into massive resorts with activities, a kids’ club, water park, etc. and don’t mind paying for it, this is the place for you. Note, I did not stay here (I stayed in a house through Airbnb).

Likewise, there are so many great restaurants in the area, with prices to suit every budget. Some of our favorites were:

There are two main airports in the area, St. Pete-Clearwater International Airport and a little further away but still not that far and a bigger airport serving more cities, Tampa International Airport. Check prices into both airports and see which is best for you. Primarily Allegiant is the major airline in St. Pete-Clearwater Airport, but there are also flights through Sun Country Airlines and charter services to Gulfport-Biloxi, Mississippi plus Sunwing Airlines has a couple of flights to Canada. Tampa Airport has many more airlines serving them but is also harder to get into and out of since it’s more crowded. 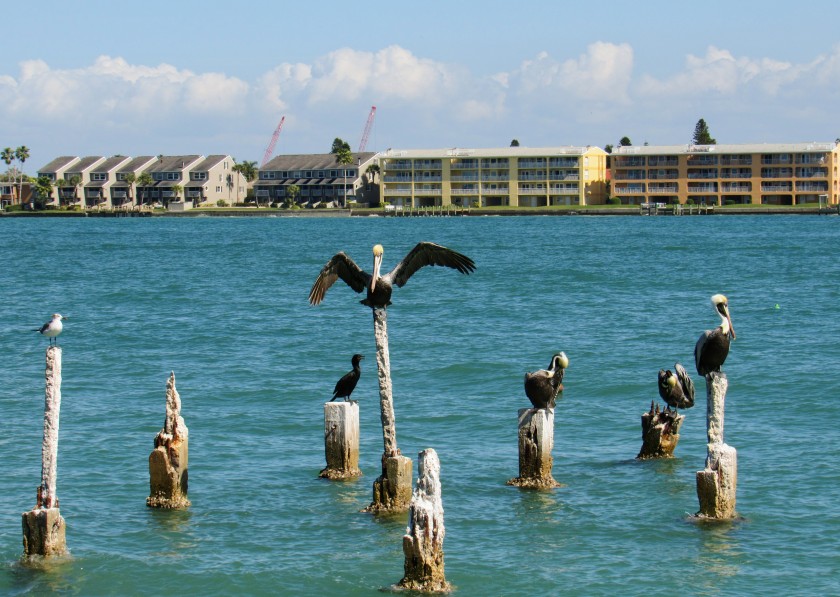 Some things to keep in mind:

Winter is the “peak” season here, meaning it’s more crowded and hotels and restaurants are a bit harder to get reservations for. Traffic is more congested. The weather here December through February is absolutely perfect, in my opinion, and still warm enough to go to the beach. Spring break is of course more crowded, so plan on that if you’re going in April. The summer months are hot and humid, but there is a nice ocean breeze to help a bit. Fall is also nice, once the temperatures drop in October.

Traffic tends to bottle-neck in certain areas that have only one way in and out, like Anna Maria Island and Fort DeSoto. Plan accordingly and allow for extra time.

“Water view” does not mean ocean view. It means you’ll have a view of a bay or other body of water but not the ocean. St. Petersburg is on the western side of Florida, with Tampa Bay on the east and the Gulf of Mexico on the west (technically there’s Pinellas County Aquatic Preserve and then the Gulf of Mexico).

Have you been to St. Petersburg, Florida? If so, what did you think of it? What did you do there?

14 thoughts on “A Brief Overview of St. Petersburg, Florida- Where to Stay, What to Do, Where to Eat”