This is part of a series of posts from my quest to run a half marathon in all 50 states. Nebraska was my 47th state.

When I was looking at half marathons in Nebraska, I only found a couple that interested me, to be honest. Once I had run half marathons in around 40 or so states and had gotten the list down to my last several states, of which Nebraska belonged, I thought I would run the Feast and Feathers Trail Half Marathon in Omaha on Thanksgiving weekend. But then a few months before the race I started thinking about all of that and then I started overthinking everything.

I had never run a trail race before. Ever. That’s one strike. Omaha weather over Thanksgiving weekend can be pretty cold and I don’t run well in the cold. That’s two strikes. I started to question if that was really the best race for me given those two big factors. Then I saw an ad for the Hot Cider Hustle Half Marathon in Omaha and that race suddenly seemed much more appealing. 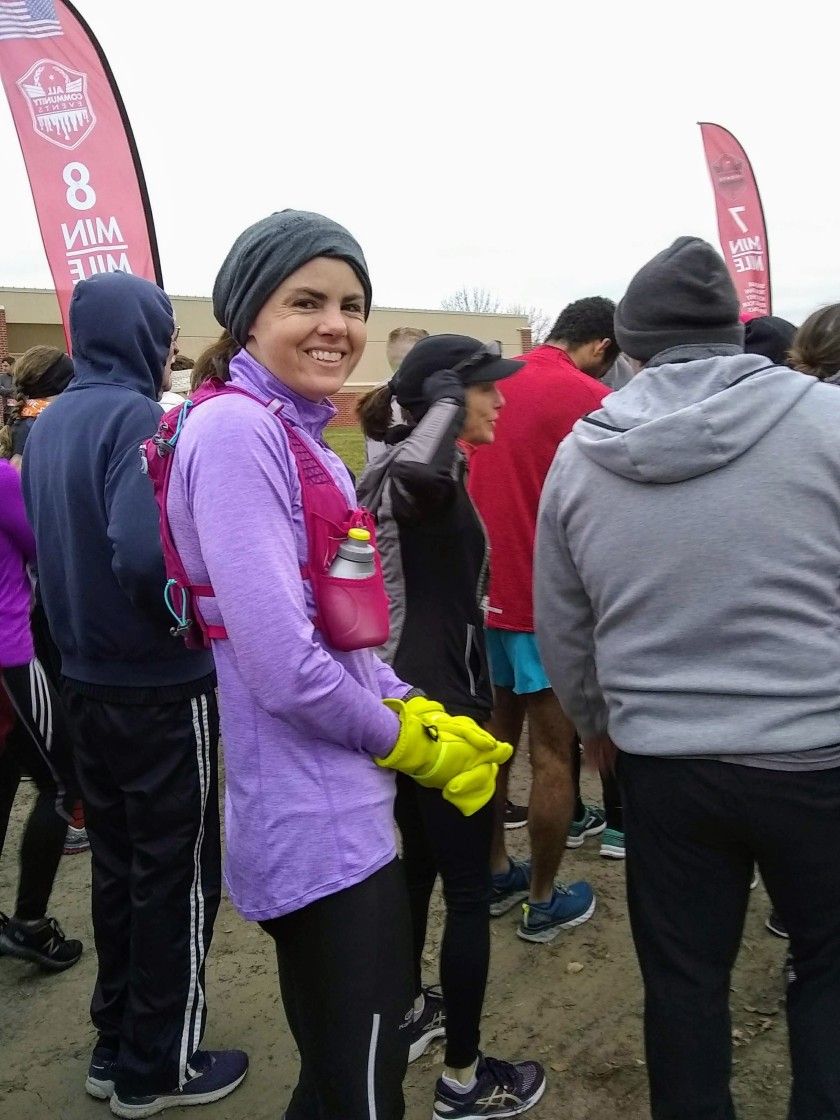 Not only would it be warmer because the race was a month earlier than the other race the end of November, it wasn’t a trail race and part of the course was around a lake so it should be at least fairly scenic and hopefully flat. It was for a good cause, the Crohn’s and Colitis Foundation, too. Plus there would be hot cider and caramel apples at the finish! Even better, you get a finisher mug and pullover! That’s way more pros for the Hot Cider Hustle Half Marathon than for the Feast and Feathers Trail Half Marathon. I’m in!

Packet pickup was on Saturday, October 26 at Fleet Feet Omaha from 10 am to 5 pm. There was the option of race-day packet pickup, but that was “not suggested” according to the race website. Finally, you could also have your packet mailed to you for $12.99. The only thing in my packet was the aforementioned pullover and race bib in a reusable tote bag. There were no other vendors presumably because it was in a somewhat small store so there wasn’t room for much else.

A cold front moved into Omaha on Saturday evening and by Sunday morning, there was a frigid wind that had come down from Canada with gusts up to 18 mph, and to top it off, the sky was completely overcast. The temperature was in the low 40’s, which would have been fine for running a half marathon, but with the wind and lack of sun, it was so cold my feet were numb for the first three miles of the race.

The race start/finish was at a local high school, Skutt Catholic. Although there were plenty of parking spaces, many were already full by the time we got there around 7:40, but we were still able to find a spot. I made my way to the port-o-johns, reluctantly handed over my warm coat to my husband (who wasn’t running), and lined up at the start. The half marathon started promptly at 8:10 and included a 5k that also started at the same time. This caused quite a bit of congestion for the first couple of miles until the 5k runners split off from the half marathoners.

The vast majority of the race was around Lake Zorinsky, criss-crossing, looping, and zig-zagging around the paths that went around the lake and through the park. Lake Zorinsky has an interesting background story that you can read about here, which goes to show the power of the running community. Overall I would say the course was scenic and there were plenty of water views.

All was going pretty well for me until I noticed somewhere between miles 4 and 5 that my left shoelace had become undone, despite double-knotting it. I took off my gloves, tied my shoe, put my gloves back on, and continued on my way. Later, those 20-something seconds that took it to do all of that would come back to bite me.

Most of the course was relatively flat with short, moderate hills until we reached mile 7, and that was uphill pretty much for about a mile, but then we got to go downhill for a while to make up for it. We had to run uphill again in the 10th and 11th miles, but thankfully we got to run downhill for the last section until the course leveled off at the finish. There was almost no crowd support but there were these two women who were cheering everyone on at the first part of the race, around mile 5 and again towards the end, around mile 13. They were shouting things like, “You’re beautiful! You’re strong!” and for me because I was wearing a purple shirt, “Go purple! You’ve got this!” I love people at races like that. At races where it’s freezing cold like this one, people like that are appreciated even more by me.

My goal for this race was to finish under 2 hours, preferably under 1:55, and I finished in 1:54. Given the weather and the fact that I run far better when it’s warm than when it’s cold, I was happy with my finish time. Now for the DOH! moment. I checked finish times that were posted as they came in and the woman that finished third in my age group finished 23 seconds ahead of me. Of course all I could think about was, “Had I not stopped to tie my shoe, I would have finished in third place.” BUT I don’t live my life by what-if’s, so I happily took my fourth place in age group finish along with a time that’s my second-fastest ever for a half marathon.

Now for the fun stuff- the swag! When I crossed the finish line, a volunteer handed me a mug that had a medal, bottle of water, and small bag of trail mix in it. The mug was of good quality; for some reason I expected a small, metal mug but this was a nice-sized ceramic mug with the Hot Cider Hustle logo and year on it. There was another table full of caramel apples, some with nuts, some without. I can attest that the caramel apple I got was absolutely delicious! Finally, the name-sake of the race, the hot cider. There was a table with big containers to dispense the hot cider either into your own mug or paper cups. A nice and friendly volunteer happily poured a cup for me when she saw my hands weren’t working properly after the race. This was delicious, steamy hot cider, as it should be, not lukewarm or watered-down in the least. I ended up getting two cups because it was so good and warmed me up.

Would I recommend this race? Yes, despite the frigid wind and hills on the latter part of the course. I realize weather can vary from year-to-year, especially in October in Omaha. Besides, the temperature itself was reasonable for a half marathon, it was just the wind that got me, and maybe next year it wouldn’t be so windy. The hills at the end weren’t exactly fun, but they were short enough that I didn’t hate the race director either, and I did at least get to run downhill afterwards, straight to the finish line. The race was well-organized and had plenty of volunteers from pre-race to finish. Finally, this race coincided perfectly with peak fall foliage in Omaha, so it was absolutely beautiful seeing all of the yellow and orange leaves on the trees everywhere (not much red, for some reason, but a little).

Hot Cider Hustle Half Marathon and 5k in Omaha, Nebraska

Have you run a race in Nebraska? If so, which one did you run? If not, is it on your list of places to run? Have you run another Hot Cider race in another city?