Last weekend when I left to go out for my 10 mile run, I felt great! My legs felt good, I felt pretty well-rested, and the weather was absolutely perfect. I was ready! I had gone about a half mile down an asphalt pedestrian trail I’ve probably walked/ran/cycled about 100 times and then I fell. Hard.

I have absolutely no recollection of tripping but I assume that’s what happened. It felt like someone was literally pushing me forwards presumably because of the momentum I had going while running. I tried to pull back when I started to fall but couldn’t so I skidded along the asphalt about 5 or 6 feet until I finally rolled onto my shoulder, thinking that would stop me, and it did. Instinctively, I didn’t want to fall on my hands but I didn’t know how else to stop other than rolling.

There was a nice couple walking their dog who came to my rescue. They asked if I was OK, and handed me one of my water bottles still full of nuun that had flown out of my hydration belt. I was a little stunned, because like I said, I really don’t remember tripping, but I stammered something like I would eventually be OK, and I thanked them after they also handed me my sunglasses that had flown off me as well. 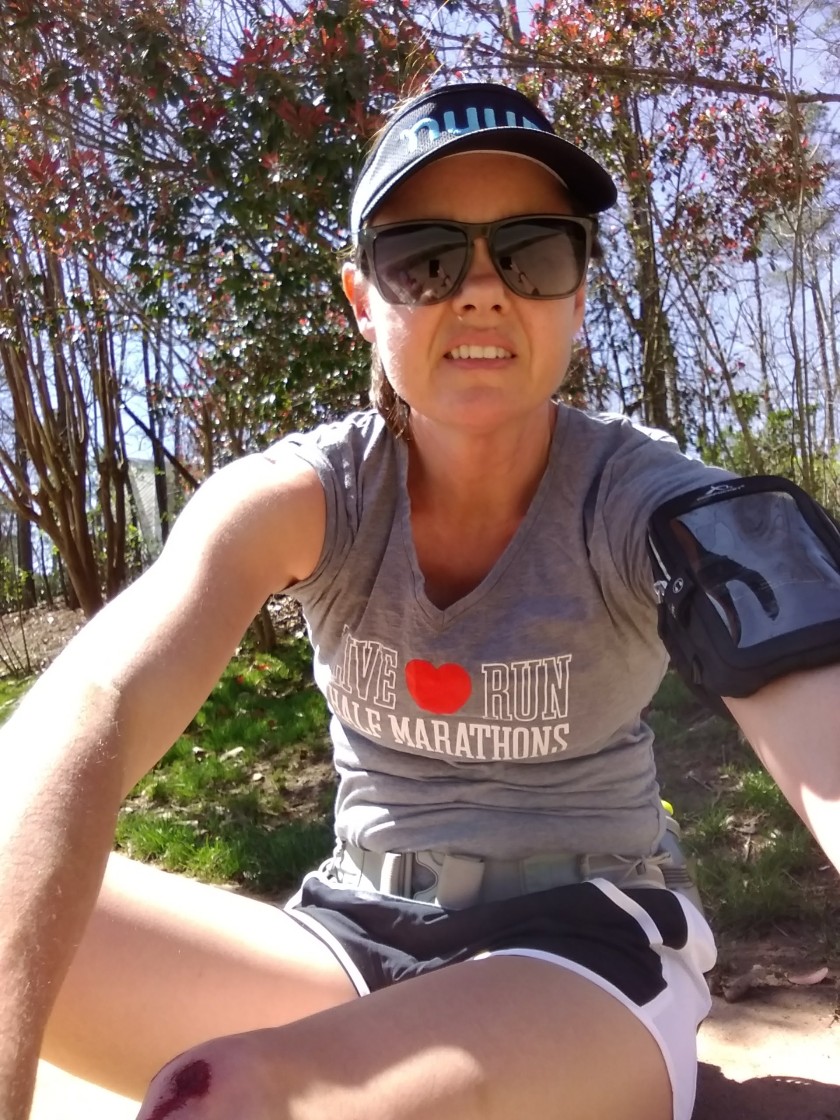 I assessed the damage and realized nothing seemed broken at least. My shoulder felt like I had just ran full speed into a giant tree or something and it was rubbed raw and was bleeding. Both hands were bleeding on the fronts and backs. My left knee was gushing blood and my right thigh and right forearm were scraped but not bleeding.

In a daze, I walked the half mile home where I washed all of my cuts and scrapes (OUCH!), put on antiseptic cream and tons of Band-Aids, took a couple of Tylenol, and iced my shoulder and knee. After about 20-30 minutes I decided to go back out to finish my run. My thought process was I was probably going to just feel more sore the next day so if I waited to run then it would most likely be even more painful than if I just sucked it up and went back out then.

Surprisingly, I had a fairly good run when I went back out the second time that day. My times were pretty good and I felt pretty good overall (albeit sore from the fall). I’ll admit, I was a little tentative about falling again when I first started back out, and I decided not to go back the way I was originally going to run, which has cracks, gaps, and bumps all over the asphalt trail. I knew I would have to face that demon again eventually, I just didn’t want to do it quite so soon.

While I was out running I started thinking how sometimes it’s almost good to go through things like this when we’re training for a race (I’m running a half marathon in May). It shows me that if this happens during a race, unless it’s more serious, I can continue running and everything will be OK. A couple of weeks ago it was cold and misting light rain when I was supposed to run 40 minutes. I didn’t have the option of waiting until later that evening to run so I went out and realized it wasn’t as bad as I had thought it was.

Although it’s not always been the case, usually I end up feeling pretty good at the end of a run, even if I didn’t feel so great in the beginning, or the weather was crappy so I dreaded running in it. The old saying, “What doesn’t kill you makes you stronger” definitely seems true in the case of runners. I think this applies to the emotional and mental aspect of running as much if not more so than the physical aspect of running.

Have any of you had a bad fall when running? What happened? Did you feel like it made you a (mentally) stronger runner afterwards?

19 thoughts on “Sometimes You Fall”