After reading Runner’s World Train Smart Run Forever by Bill Pierce and Scott Murr (see my review here), I wanted to see how my age adjusted half marathon times looked. One of the main takeaways from the book is that although your race times will inevitably increase as you get older, particularly beginning in your 40’s, your age adjusted times should actually remain the same or decrease if you’re lucky.

Warning: this blog post is full of data and probably only for true data geeks. If it puts you to sleep, don’t say I didn’t warn you. For those of you that are into this kind of thing, you’re in for a treat!

First I plotted all of my half marathons from the very first one in North Carolina to the  one I ran in Utah. I did not include my last race in New Jersey, however. This includes half marathons I ran over an almost 20 year span with 41 half marathons in 39 states, so there are a lot of variables here besides just age to consider. For instance, the terrain and weather varied greatly from one race to the next. Beyond that, I was anemic for a period of years, so there is a spike in my times due to that until I was fully recovered. 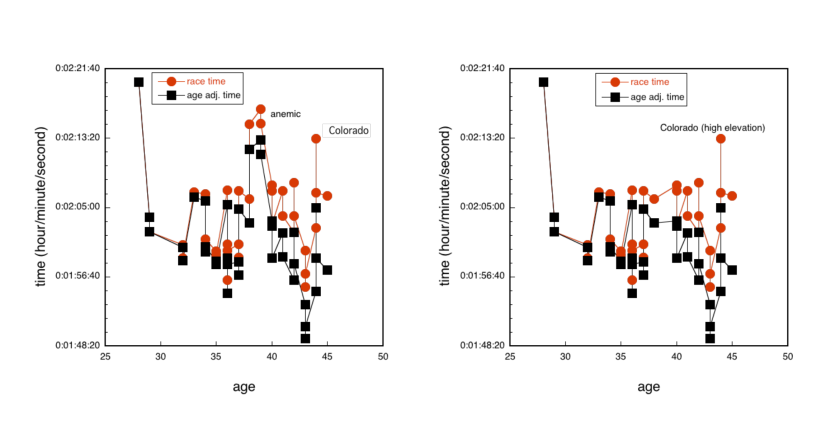 There is also a spike in my times for the race in Colorado. Running at a high elevation really took it out of me so this was definitely one of my slowest finish times. I decided to take out the times when I was anemic and the points from Colorado, since I thought they were outliers from the rest of the data. 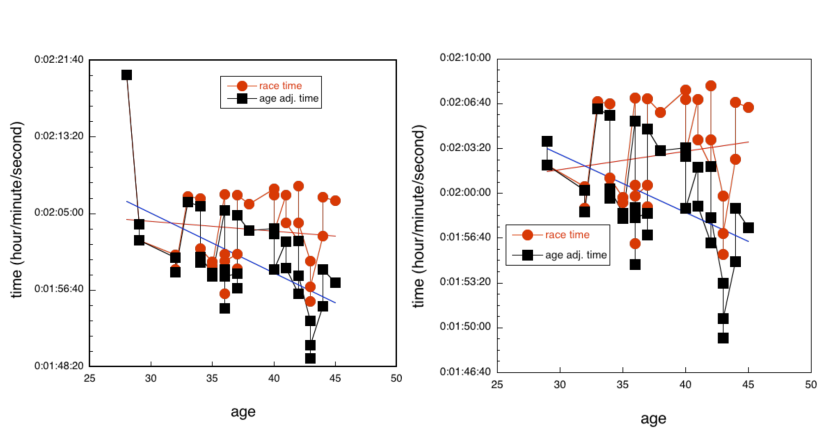 OK. So now I’ve removed the points from when I was anemic and my race in Colorado. With these two graphs, I can get a better idea of the “big picture” of my running.  The obvious outlier in the first one is my first race ever. Even with that point included, however, the general trend for my age adjusted times are decreasing, as shown by the linear fit shown by the blue line. When I throw out my first race time, the trends are more consistent. My race times have averaged around 2 hours and a couple of minutes over the years and have slightly increased. However, and here is the main point of the whole thing, my age adjusted times, again, as shown by the blue line, have definitely decreased over time, which is what I wanted to see.

Another interesting thing is the very large degree of separation between my race times and age adjusted times in my 40’s. For my half marathon in Utah, the difference between these two times is almost 10 minutes!

My plots aren’t anywhere near as “pretty” as the ones in the book, but I think maybe a big reason for that is the author’s age spans over a much longer time than mine do. Perhaps when I’m in my 70’s (as one of the authors is) and I plot my race times versus my age adjusted times, I’ll see something even more linear, rather than what I see. Hopefully even though my race times will (inevitably) increase, my age adjusted times will continue to decrease linearly.

Here’s the link to the Runner’s World website where you can plug in your numbers to see your age-graded race times.

15 thoughts on “My Age Adjusted Half Marathon Times”