This is part of a series of posts from my quest to run a half marathon in all 50 states. Utah was my 39th state.

The 2017 Dogtown Half Marathon in Washington, Utah (just outside St. George in southern Utah) was so cold. How cold was it, you ask? It was so cold my feet were numb and I couldn’t feel them until I ran the first 1.5 miles of the race. It was so cold, my hands were still cold at the finish, despite wearing gloves for the entire race. It was so cold I saw a woman warming her hands from the car exhaust pipe of a police car that was sitting near the race start with the engine idling. OK. So how cold was it really? It was 28 degrees at 7:20 when I was dropped off by my husband and for a southern gal like me, that’s frigid. I can’t remember the last time I ran in temperatures that cold.

But first, let’s back up a bit. Packet pick-up was Friday, February 24 at the Washington Community Center and was quick and efficient, or there was the option to hang out for a bit and try to win some of the prizes being given away. There were the usual vendors selling shoes, running apparel, and GU; as well as tables advertising other races in the area, and random other local businesses. There was also a bounce house there for parents with young children. My daughter was running the 5k so she and I went to pick up our packets together. We got a rucksack bag, a t-shirt (cotton/polyester blend), our bibs, and mostly junk flyers and coupons we would never use.

Race morning was a frigid 28 degrees, as I mentioned earlier. When the sun finally came up over the mountain, it at least felt a little warmer. Half-marathoners were bused to the start, essentially an industrial park, for the point-to-point course. The course was advertised as “net downhill,” and while portions were certainly downhill, there were plenty of uphill portions as well. If 13.1 miles isn’t enough for you, there is the Double Dog Dare Challenge, where you run the half marathon course in reverse, then run it again the opposite direction with the rest of the half marathoners, giving you 26.2 miles of hills, hills, and more hills!

We were only in the industrial park section of the course for a short while before we headed toward more scenic areas. For me, though, the best part of the race was around miles 6-9, when we were running through trails. The trails were sandwiched in-between a canyon and it was beautiful. There were rolling hills through here and while it wasn’t exactly easy running through this section, it wasn’t nearly as difficult as some of the other areas with steep inclines that seemed to go on forever. There were nice sections of the course with viewpoints of a beautiful snow-capped mountain, and we got to see this view from different angles. I didn’t run with my phone for this race, so I didn’t take any photos along the course, and I unfortunately can’t share them here. I did snag this photo which was taken from the race start from the Facebook site, however:

The last few miles were past a community park with soccer/lacrosse fields and finally the end was in sight! I was utterly exhausted starting around mile 6 of the race, so I just didn’t have it in me to speed up towards the end, as I sometimes do. In fact, my last 3 miles were my slowest of the race. My left leg, which is my “good leg,” was bothering me very early in the race, with a tight hip flexor and my quad felt like it was made of lead. Usually it’s my right leg that’s the problem, with my knee giving out and other issues I’ve been having with it, so I have no idea what was going on with my left leg. I just knew this wasn’t going to be one of my best finish times and I was fine with that.

So finally, I reached the finish line at Staheli Family Farm and was handed a hefty-sized medal. I was directed to a table full of lunch-size paper bags, each of which included a water bottle, fruit snacks, and trail mix. Also on the table were containers of chocolate milk, string cheese, bananas, oranges, and bread. I did like having the ability to just grab a bag of snacks and go.

On a side note, as I mentioned earlier, my daughter ran the 5k, and she won second place in her age group! I was so happy for her! She got a medal similar to the race medal, but it was silver and looked slightly different. She was thrilled, of course, especially since this was only her fourth 5k.

My overall impressions of the race are that it was a tough but beautiful course. The below-freezing temperature wasn’t conducive to a fast time for me, since I tend to have problems breathing when it’s that cold (I had asthma when I was a baby and had cold-induced asthma through grade school). For someone that likes running in colder temperatures and enjoys the “challenge” of hills, this would be a good race. It was well-organized and not overly crowded, but not so sparse that you would be running by yourself for miles on end. There was almost no one cheering on runners along the course, though, so if you enjoy that, you won’t get that at this race. Overall, it was a scenic, fairly low-key, challenging race. 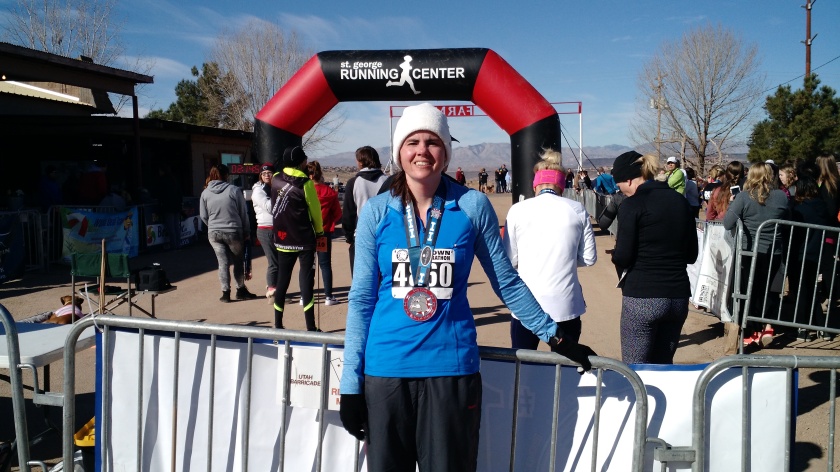 6th in my age group