This is part of a series of posts from my quest to run a half marathon in all 50 states. Alabama was my 23rd state.

When I read this blurb about the Kaiser Realty Coastal Half-Marathon, I thought this was a good race for me: “Why run it. For the wildlife. At this backcountry race across the trails of the 6,150-acre Gulf State Park and wildlife reserve, don’t be surprised if you spot a great horned owl or gopher tortoise along the route. The mostly flat course meanders beside swamps, beaches, and rivers, and finishers will be rewarded with local seafood cuisine.” How could I resist? I signed up immediately for the 2011 race.

This race was sponsored by BP and they had paid for elite runners Deena Kastor and Johnny Gray to be there although they weren’t actually running the race. I had never seen Deena Kastor in person before and was surprised to see she was even tinier than I thought she was. She and Johnny both gave inspirational talks and got the crowd pumped before the race.

Well, except I wasn’t exactly feeling pumped; I was feeling more like drained and exhausted. In the days before the race I had been sick with a cold and was running a fever the morning of the race. I remember telling my husband that running a half marathon was just about the last thing I felt like doing at the moment but of course I sucked it up and ran it anyway.

The majority of the course was on a paved bike/running trail that sheltered us some from the sun and wind. Although you would expect the course to be flat since it’s in a coastal town “at the beach,” the course was slightly uphill and there was a strong wind, so it wasn’t as easy as I expected. Only about one mile was on the road and we could glimpse the ocean then but it’s not like we were running along the coastline.

Despite my cold and fever I passed several runners the last few miles and was thrilled to see the finish line. My finish time was 2:15:08. The finisher medal was small and plain, but the post-race food more than made up for it. The food after the race was absolutely incredible- a full on southern spread of crab cakes, shrimp and grits, crab corn chowder, seafood gumbo, rolls, shrimp and oyster po boys, chicken fingers, and more; definitely some of the best post-race food I’ve ever had.

My family and I relaxed in Orange Beach before and after the race. Orange Beach is a clean area with powder white sand and not overly touristy. There aren’t a lot of hotels (not sure if there are any really) in the area so I suggest searching airbnb or renting a condo or beach house through Wyndham Vacation Rentals. The race is held on Thanksgiving weekend so it’s typically quiet then but the weather is still pretty warm. It’s a great place for a racecation! 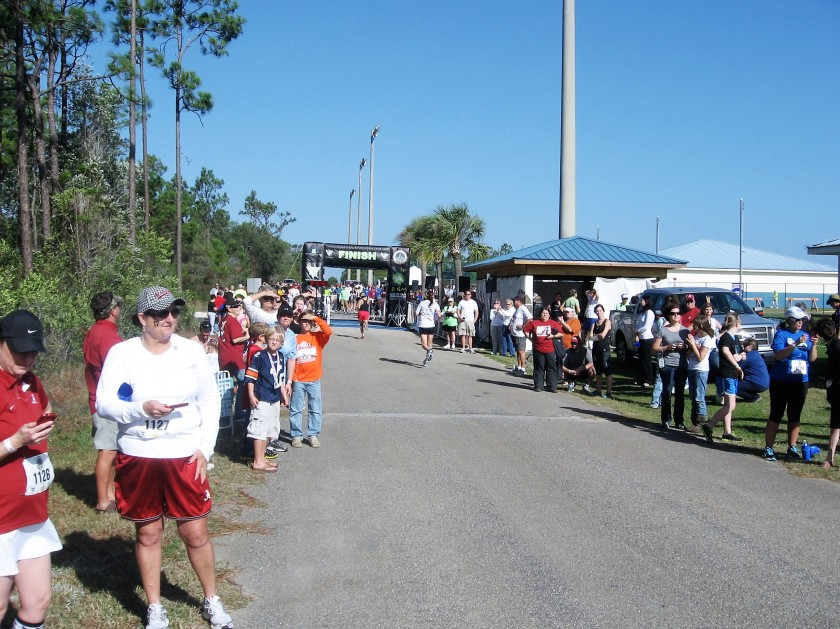 I love to run and I love to travel. I decided several years ago to combine the two. I set a goal for myself to run a half marathon in all 50 states. So far I’ve ran half marathons in 48 states, including three in North Carolina (before I set my goal). I’ve also traveled to many countries. I intend to chronicle my travels and races here.